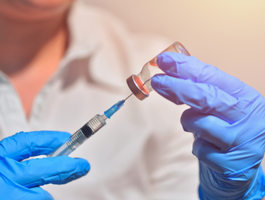 ​The announcement made by the Health Secretary stated NHS staff in England will have to be vaccinated by April.

​This has raised several concerns across the Healthcare industry.

Here’s what you need to know:

While 90% of NHS staff are fully vaccinated, there remains 103,000 workers who have not had their first dose.

In aim to help protect patients and NHS staff, Sajid Javid told MPs that he expected to set a deadline for the beginning of April to give 103,000 unvaccinated workers time to get both jabs.

Further concerns have been raised that this could lead some NHS staff to leave their roles, adding to healthcare staffing issues.

The government's decision follows a consultation which considered whether both the Covid and flu jabs should be compulsory.

Mr Javid concluded that the flu vaccine would not be made mandatory.

NHS staff who are medically exempt and those who do not have face-to-face contact with patients will not have to take the Covid Vaccine.

In a Commons statement, Mr Javid said compulsory vaccinations would "protect patients in the NHS, protect colleagues in the NHS and, of course, protect the NHS itself".

He said the requirement would be enforced 12 weeks after parliamentary approval - likely to be from April.

From Thursday 11th November 2021, all care home workers must be vaccinated.

Scotland and Wales have not made any proposals to make Covid jabs compulsory for NHS workers or care home staff, while in Northern Ireland there is to be a public consultation.

Chris Hopson, chief executive of NHS Providers which represents England's NHS trusts, said the possibility of losing staff was a "real problem" as the NHS runs on fine margins and already relies on staff to work extra shifts.

There will be anxiety that chronic understaffing problems could be exacerbated, he said. "We simply cannot afford to lose thousands of NHS staff overnight."